If you’ve ever been to Dublin or an Irish pub, you’ve probably enjoyed your fair share of the black stuff. Guinness is super smooth, creamy and so satisfying that one pint quickly becomes 4 or 5. While Guinness may be the original silky smooth stout, more and more breweries are trying their hand at the style.

But what is it that makes it so smooth and creamy? Some might say the use of flaked barley helps create a tight, smooth head, but the real secret lies in the dispense method. Guinness and other creamy stouts and ales are served using a mixture of nitrogen and co2, rather than simply co2 like most beers.

This use of nitrogen has led to a surge of nitro stouts hitting bars across the globe, but it’s possible to replicate the style at home as well. If you’re already kegging your beer at home, you can add a nitro stout to your repertoire fairly easily.

To get started on your nitro stout adventure, you’ll only need to pick up a few additional items. Once you have them, you’ll be able to enjoy nitro stouts whenever you want.

Beer gas is a mixture of around 25 — 30% co2, to 70 — 75% nitrogen (n2). Nitrogen is often stored under much higher pressure than carbon dioxide, and requires a stronger canister to hold it, so you can’t just fill up your co2 tank with beer gas. They have a different thread to co2 tanks, preventing the wrong regulators from being fitted. You can generally find beer gas at beverage gas supply stores.

Due to the high pressure that nitrogen is stored under, you’ll need a nitrogen regulator that is capable of withstanding it. Anything rated to at least 3,500psi should suffice, with some homebrewers using oxygen regulators. The thread will correspond to the tank, preventing mishaps. 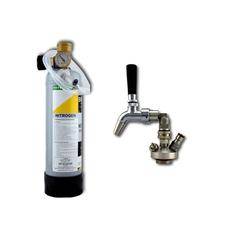 The stout faucet is last piece of the puzzle may seem small, but it is the key to creating a cascade of smooth, creamy beer. Without it, your beer would lack the big creamy head that is essential to a nitro stout, and may be a little too prickly, rather than smooth. It has an in-built restrictor plate, which forces the beer through a number of tiny holes, knocking the co2 out of solution and encouraging the cascade effect. You can also use a sparkler, which will screw onto certain taps.

If you’re not too keen on searching for another gas canister and regulator, iKegger offers a fantastic, easy solution, which can also be used to enjoy nitro cold brew coffee, cocktails or even tea.

Our nitro packages include: 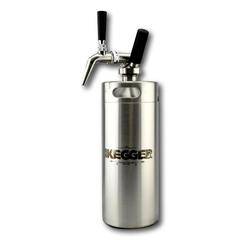 Simply add your stout to the keg, carbonate and condition. When you’re ready to serve, insert an N20 bulb, give the keg a quick shake and enjoy beautifully creamy stout. They’re ideal for parties and are fully portable. Besides nitro stouts, they can be used for nitro cocktails and cold brew coffee — we recommend espresso martinis!

Whether you use an iKegger setup or purchase beer gas, nitro stouts need to be conditioned correctly to ensure a perfectly creamy pint. These smooth stouts don’t require much carbonation, and should typically be carbed to around 1 – 1.2 volumes of co2 max. There are 2 ways you can force carb your nitro stouts; with beer gas or pure co2.

Contrary to popular belief, nitro stouts are not actually carbed with nitrogen, it is generally only used to serve the beer. This is because it’s not very soluble and will not dissolve into the beer like co2 does. However, you can use beer gas to carb your beer, and the method is fairly simple. Just hook up your gas to the keg of beer, set it to 30 psi and leave it for at least a week. This should allow the correct amount of co2 to be dissolved into the beer.

Alternatively, you can use pure co2 set at 8 – 10 psi. Leave it to condition for at least a week, then switch over to beer gas to serve. This method works well for the iKegger kits, allowing you to plug and play whenever you’re ready to serve. Whichever method you use, take care not to over carb as this can lead to an extremely foamy mess when you try to serve.

The secret to a perfect nitro stout serve, complete with cascading bubbles and a thick, foamy head, is in the serving pressure. Unlike your typical beers, nitro stouts need to be served a higher pressure, generally around 25 – 30 psi. Running through the hose at high pressure, the stout will eventually hit your stout faucet.

As it smashes against the restrictor plate, the carbon dioxide that was in solution will be forced out through the tiny holes, forming tiny bubbles that seem to drop down to the bottom of the glass, before rushing up to form that perfectly dense nitro stout head. What you’re left with is a beer with very little co2 left in it, resulting in a smooth, rich and creamy mouthfeel.

Your beer lines should generally be shorter than normal lines, as you want the beer to hit the tap at high pressure; around 1.5 metres should be enough. If your first pints are don’t create the cascade effect, it’s worth increasing the pressure. If there’s too much foam, try reducing the pressure. Each system is slightly different, so tweak the serving pressure until you attain the perfect pint. 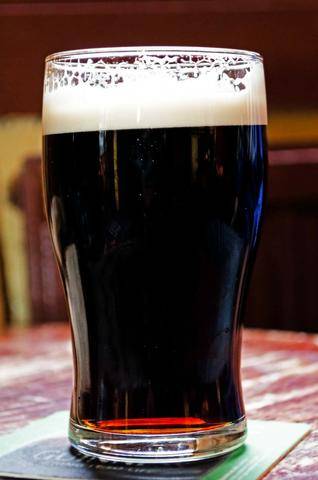 Of course, with a nitro stout setup you’re not limited only to stouts. Many styles lend themselves to a nitro pour, including bitters, porters and milds. Generally speaking, maltier beers are best suited to nitrogen, rather than hop bombs, as nitrogen tends to strip away hop aroma slightly. However, feel free to experiment and use your new set up for anything from stouts and bitters, to coffee and cocktails!