Cask ale, or real ale slowly began to take off in Oz in the early 2010s. Since then, more microbreweries have embraced this humble, traditional British style, with an ever-increasing number of pubs pulling pints of real ale for a thirsty public. But why go all the way to the pub when you can brew and serve endless pints of easy going cask beer at home?

Don’t worry if you don’t actually have a cask, the wiley homebrewer can always improvise, creating an accurate representation of the style even without the traditional equipment. In fact, anyone who is already kegging their beer can effortlessly create a homebrew cask ale setup with the equipment they already have.

What Is Cask Ale (Real Ale)?

When people think of traditional British beer, they typically think of beer that is warm and flat — this is cask ale! While the preconceptions are somewhat inaccurate, they do get to the bones of what cask ales are. In comparison to keg lager, real ale served from the cask is very lightly carbonated, with a light tingling of gas on the tongue. It’s served at cellar temperatures, of around 12–13*C, which while not warm, is warmer than the typical serving temperature of keg lager.

Cask ale undergoes a second, natural fermentation within the cask and is never injected with CO2. This natural, second fermentation gives a softer carbonation than force carbing and is normally achieved by either adding additional sugar to the cask, or transferring the beer to cask before fermentation has fully completed.

Finally, cask ale differs from other beers in the way that it’s dispensed. Rather than forcing the beer out using CO2, cask ale is pushed out using air, which gives the beer a noticeably shorter shelf life than other styles, but also alters the flavour in other ways. A beer engine is often used in pubs, which works like a vacuum, drawing air into the cask, which in turns pushes the beer out of the tap. Alternatively, cask ale can be served directly from the cask, known as gravity dispense.

How To Make Cask Ale At Home

For the most part, the actual brewing process of a cask ale is much the same of any other beer, so nothing new there. The same goes for primary fermentation. It’s not until refermentation and racking to a ‘cask’ that things change up a bit.

In theory, you can — and people have — make any style of beer a cask ale, even lager! However, some styles are far more suited to the process. Traditional British styles such as bitter, ESB and pale ales all work well, but stouts, porters and even imperial stouts can work fantastically. IPAs aren’t so good, though some soft carbed double IPAs can be magnificent. At the end of the day, it comes down to your personal taste and it’s well worth experimenting.

There are 2 ways you can be sure of a successful second fermentation for your cask conditioned beer. The first, more popular method involves adding priming sugar, much like when bottling your homebrew. You will need less sugar than you’d normally use for bottling, due to the smaller head space. Also, you’re aiming for a crystal clear, lightly carbonated beer, so if you add too much sugar, you could end up with a gusher that will disturb the sediment.

The second method requires you to accurately know when your yeast will fully attenuate and how far it will go. You’ll need to transfer the beer to the cask before primary fermentation is fully completed. This gives a smoother carbonation, tight, long-lasting foam and a more rounded flavour, though it can be difficult to get it right at the beginning. It’s best suited to a beer you make regularly and know inside out.

Cask Ale In A Keg

Most homebrewers don’t own a cask, and they can be difficult to come by at a reasonable price. Fortunately, that doesn’t mean that you can’t make a decent cask beer at home.

The easiest method is to dispense your cask conditioned beer using gravity. This is done by positioning your keg horizontally, with the liquid post at the top and the gas post at the bottom. Fit a picnic tap to the gas dispense post, and a bare fitting to the liquid post. This allows air into the keg to force the beer out of the picnic tap.

This method does have its limitations however, with low carbed beers not forming a tight seal on the lid, occasionally leading to leaks. Also, you’ll need to find a cool place to fit your horizontal keg in. 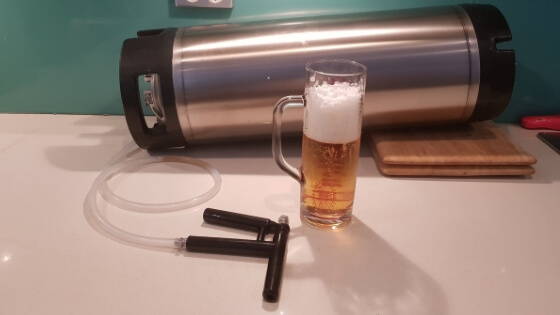 If you can get your hands on a beer engine, you can store your keg vertically in your keezer like you normally would. These hand pumps draw air in through an open valve on the gas post, while simultaneously forcing the beer out through the tap.

It may be worth cutting the dip tube slightly, to account for the additional sediment that occurs due to refermentation in the keg. 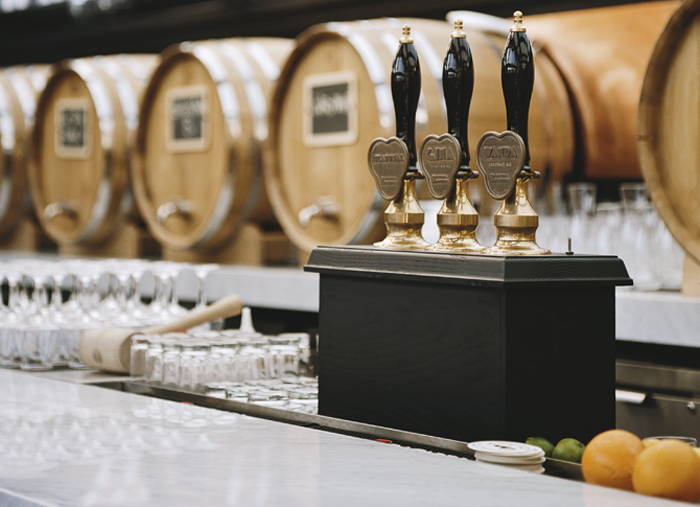 Cask ale is a living product and needs special care and attention throughout its lifespan. There are a few tips and tricks that will ensure your beer is the best it can be when the time comes to draw the first pint. Patience is certainly a virtue when it comes to cask ale, so give the beer plenty of time to condition fully before chilling to a serving temperature of around 13*C.

Casks are normally vented for 24–48 hours before serving, this is typically done by hammering a spiel into the bung hole of a cask. The same result can be achieved by fitting a valve to the gas post of your keg. Keep this open just a little, to allow the excess CO2 to hiss out slowly. Venting your cask ensures the beer comes out clear, rather than pouring pint after pint of foam.

It’s worth putting your keg in its final resting/serving position as soon as possible, preferably before venting. This allows all the sediment to drop and stick to the bottom of the vessel, ensuring crystal clear beer. The more you move your keg, the more you disrupt the sediment and the longer you’ll have to wait before drinking.

Finally, as air is an integral part of the dispense process, cask conditioned beer is typically at its best for the first 3 days it is open. After 5 or 6 days it may start tasting stale and any longer than that, it can become somewhat vinegary. You can install a CO2 breather to supply a low level of CO2 to the keg, creating a protective blanket. Doing so will double the lifespan of your real ale but may upset some British real ale purists!

FYI – I do the last fermentation in a polypin (you can get them here but I bring in from UK), I have built small frames for the polypins so they fit in a barr fridge with a hole drilled for the beer tube and another for the thermostat thermometer. The latter is to to keep the temperature at about 13C so it doesn’t get too cold and lose falvour (13C is about normal UK pub cellar temp. It works well. I have brought two beer engines from the UK but one has now died and I am on the lookout for another; this is how I found your site. Any ideas on where I could get one would be apprecited. If intereested, I could provide photos.